What good are rockets without something to shoot?

Yes, that's right - there's stuff to shoot now.  Defeat the rocket launcher-toting yellow pill capsules (aka placeholder graphics) before they get you!  Here's a quick summary of what's been changed with the Junk Engine in general, and ZOMG Rockets! in particular:

Added a fixed-size mode to the world manager

When in fixed-size mode:

The Game Manager now supports spawning of NPCs.  Spawning behaviour so far is very simple.  The level defines an initial number of enemies, along with a minimum active number, and the total number of NPCs for the level:
NPCs have basic AI support through the AI class.  Currently this is a simple state machine, with more advanced behaviour to come later.

ZOMG Rockets! has been changed to use fixed size worlds, and has basic victory and defeat conditions.  Yes, it's possible to get your ass handed to you by a Dr. Mario reject: 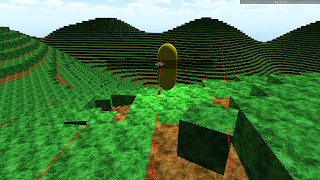 As usual, you can try the latest build here.
Posted by CodeBison at 6:48 PM