The Junk Engine is what I'm calling the vector/block-based game engine I'm creating.  I suppose it's not an engine in the truest sense, since it's being built in Unity3D.  So I guess Unity3D is the engine, and Junk is a framework.  But I'm going to call it an engine anyway.

So the idea is that I'm going to continue to build and refine Junk as I go, building a series of games with it.  My ultimate goal is a procedurally generated, "infinite" persistent multiplayer RPG (not MMO - I'm not that crazy).  I'm envisioning something along the lines of Cube World, Block Story, and a splash of Unlimited Adventures.

So that's the ultimate goal, but I'm not starting there (I like to actually finish stuff).  Along the way, I'm going to be building multiple games with Junk as I add new features.  The first game on the list is a rocket arena style shooter thing (dev build playable here).  I plan to keep it nice and simple, probably with two-stage matches.  The idea is to allow a couple of minutes to build defenses, then go nuts on your opponent.  The only weapons available will be rockets and the terrain.  The next game after that may be a first-person zombie roguelike, depending on how the rocket-y awesomeness turns out. 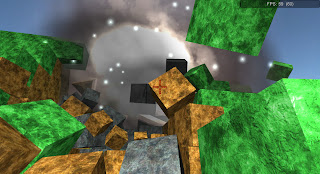 Posted by CodeBison at 9:47 PM